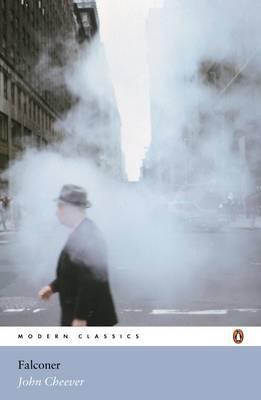 Falconer, may, in fact, be The Great American Novel—or at least the greatest American novel of the last 30 years. And while, at first glance, it may seem unlikely that a novel about a drug-addicted man who murders his brother would offer the clearest window into the American man, the family and marriage—the novel effortlessly accomplishes that and captures, in great glory, the pathos, the moral fiber, the twisted sister that America has become to our own history, servant to our most primal and prurient impulses.

First published in 1975 and showing no signs of age, the story reads as though its author took a deep breath, dipped his quill into the collective inky pots of history, culture, literature and religious thought and then, in a single exhalation, transformed all of it into a nearly perfect tale. Simultaneously devastating and transcendent—it is a celebration of all that is human. 'But they look so nice,' someone says... as the newly arrived felons march quickstep across the yard of Falconer Prison, which was recently and briefly renamed Daybreak House. Throughout the author artfully plays the comic and tragic off each other, relieving the burden of his true depth with a great guffaw. At the close of Chapter One, Chicken Number Two, a fellow prisoner, tells Farragut, 'There has to be something good at the end of every journey' and that he will have thousands of visitors, including his wife, 'She'll have to come and visit you. She ain't going to be able to divorce you unless you sign the papers and she'll have to bring them here herself. So all I wanted to tell you, is what you already knew—it's all a big mistake, a terrible mistake.'

The story goes that John Cheever started his days by dressing for work; putting on his good suit, his felt hat and taking the elevator down with all the other men of a certain class on their way to the office. But from the lobby of his New York apartment building he would take the stairs to a windowless storage room in the basement. He would hang up his hat take off the suit and sit, in his underwear, typing until lunch time when he'd get dressed again and rise to the surface.


Falconer, written after the author spent a month getting sober at the infamous Smithers Treatment Center in New York City, a facility that Truman Capote once described as Devil's Island, is perhaps the greatest of Cheever's works and closest to the bone. In her family memoir Home Before Dark, Susan Cheever writes of her father when he was sober, saying that it was like having back the man she remembered from her childhood, humorous, tender, engaged. After his time at Smithers, Cheever never drank again.

In Falconer, Cheever gives voice to his darkest fears, his struggles—alcoholism, homosexuality—producing a stunning example of the transformation from the deeply personal into the profoundly public and broadly resonant. In the end it is a book about freedom—about liberating oneself. Before this, the author saw himself, or perhaps more accurately his literary dopplegangers, as ersatz country squires, men who at one point had it all and then some, athletic type, men believing their role in life is to 'possess the most beautiful women,' family men, devoted lovers of god and country. In Falconer, Cheever depicts Farragut, a professor, as all that and more; he is a fallen man, a criminal and an addict filled with sorrow for not having done as well as he hoped. With a single image of Farragut and his wife naked in the bathroom discussing the effects of brie cheese on their bowels, Cheever strips their marriage down to its bones.

Cheever is acknowledging the divide, the deeply dangerous gap between a man's public self, his projected image versus his true se]f, how he is experienced or experiences himself from the inside out. Appearances mean everything to Cheever; his men want to be read as successful, they want to have the right wives, children, careers, they are terrified of their impulses, their rage, the prospect of age, of literally and figuratively losing their hard-on for life, for slipping in one way or another and yet they are human—all too human. While in solitary confinement, Farragut crafts letters to his governor, his bishop and his girl, a stiff starched sheet with a stolen pen. These letters are incredibly eloquent, lush, graceful, filled with a heady heightened prose that hovers on the precipice of the hallucinatory.

To his governor he writes that he's been a guest at the White House on several occasions and 12 years ago was certified a chronic drug addict. To his bishop he makes the point that his life closely follows the lives of the saints, going on to say, 'As Your Grace well knows, the most universal image of mankind is not love or death; it is Judgment Day.' And in writing to his girl he drifts deep into memory, 'And I remember when we first met, and I am today and will be forever astonished at the perspicacity with which a man can, in a glimpse, judge the scope and beauty of a woman's memory, her tastes in color, food, climate and language, the precise clinical dimensions of her visceral, cranial and reproductive tracts, the condition of her teeth, hair, skin, toenails, eyesight and bronchial tree, that he can, in a second, exalted by the diagnostics of love, seize on the fact that she is meant for him.' Farragut closes the letter with, 'I can remember this and I can remember the sailboat race too, but it is getting dark here now, it is too dark for me to write anymore.'

The question of that darkness, whether literal or metaphoric, doesn't matter as much as Cheever's ability to turn out beautifully honed devastating lines that cut all ways at once. In Falconer, Cheever achieves an awe-inspiring balance of positive and negative, the push and pull of a story, of a man so deep and dark and still filled with hope—hope in the face of loss, hope that in the end there is something more, hope that is human, life affirming. Cheever is a writer of exquisite and sometimes excruciating accuracy. One can picture him in Ossining, a small town about 40 miles from New York City, a town Cheever called home and a town that is also home to the infamous Sing Sing prison where the author taught creative writing. The presence of the prison is inescapable—an ominous stone fortress with barbed-wire fences and armed guard turrets. From the hilltops of the otherwise bucolic streets around the town you can hear the sounds of the men inside the prison.

With Falconer, Cheever takes the mythic, the biblical, the Cain and Abel of it all, and weaves a story of how one brother, Ezekiel (Farragut), was pushed to murder the other, Eben. It was in fact Eben who always wanted Farragut dead and who goes so far as to remind Farragut that their father called the abortionist to come and get rid of him before he ever came to life, and who in a subtle attempt to knock his brother off, encourages him to swim in unsafe waters. The story is one of a heroic heart, a mythic quest for more—perhaps that is the second wave of the American dream, the simple incantation—more. I need more.

It is the intensity of the rage, the intellect, the biting fierceness of the prose played against writing that is deep, luxurious, reaching backward and forward through time, through history, through memory, and coming back to this penultimate moment, the murderous moment that brought this man to jail that make this book so painfully brilliant. Falconer is about death and resurrection—it is poetic and powerful and in the end the reader too wants to shout, 'Rejoice.' Falconer is an excavation of the American soul—it is a masterpiece.