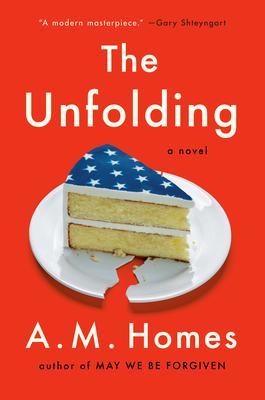 In her first novel since the Women’s Prize award-winning May We Be Forgiven, A.M. Homes delivers us back to ourselves in this stunning alternative history that is both terrifyingly prescient, deeply tender and devastatingly funny.
The Big Guy loves his family, money and country. Undone by the results of the 2008 presidential election, he taps a group of like-minded men to reclaim their version of the American Dream. As they build a scheme to disturb and disrupt, the Big Guy also faces turbulence within his family. His wife, Charlotte, grieves a life not lived, while his 18-year-old daughter, Meghan, begins to realize that her favorite subject—history—is not exactly what her father taught her. In a story that is as much about the dynamics within a family as it is about the desire for those in power to remain in power, Homes presciently unpacks a dangerous rift in American identity, prompting a reconsideration of the definition of truth, freedom and democracy—and exploring the explosive consequences of what happens when the same words mean such different things to people living together under one roof. From the writer who is always “razor sharp and furiously good” (Zadie Smith), a darkly comic political parable braided with a Bildungsroman that takes us inside the heart of a divided country.
Bookshop.org
Barnes and Noble
BAM (Books-A-Million)
Apple Books
Amazon
"From her first book onward, A.M. Homes has been challenging us to look at fiction, the world, and one other as we haven’t done—because we haven’t had the nerve, the eyes, the dire and dispassionate imagination. Gripping, sad, funny, by turns aching and antic and, as always, exceedingly well-observed and written, The Unfolding opens up another one of her jagged windows, at times indistinguishable from a crack, in the world that is always unfolding, and always vanishing, around us." -- Michael Chabon, bestselling and Pulitzer Prize-winning author of Moonglow and The Amazing Adventures of Kavalier & Clay
“A terrific black comedy, written almost entirely in pitch-perfect dialogue, that feels terrifyingly close to the unfunny truth.” -- Salman Rushdie, New York Times bestselling author of The Golden House and Quichotte
“How can a book be hilarious and chilling at the same time? A.M. Homes’s The Unfolding is a modern masterpiece, a scary immersion deep into the heart of American power. I will never look at a white man in khakis reading historical non-fiction in business class the same way again.” –Gary Shteyngart, New York Times bestselling author of Little Failure and Super Sad True Love Story
"A dazzling portrait of a family—and a country—in flux. A story about what happens when truths that once seemed self-evident turn out to be neither self-evident nor even true. A.M. Homes has perfectly captured an America as it lurches toward freak-out, and a family as it shreds the lies it’s been living by. The Unfolding is hilarious and shocking and heartbreaking and just a little bit deranged—in other words, it’s a book that feels like what it feels like to be alive right now." --Nathan Hill, author of The Nix
“The Unfolding is wonderful. Compelling, funny, horrifying, and tremendously astute, this novel cuts right to the bone.” – Phil Klay, National Book Award-winning author of Redeployment and Missionaries
“The book is a disarming and heartbreaking family romance, a diagnosis of our present dilemma, and an exhibition of Delillo-sharp nerve and vision, told in dialogue that crackles and pops from the force of its internal contradictions.” – Jonathan A. Lethem, National Book Critics Circle's Award-winning author of Motherless Brooklyn